Filling His Mouth with Puke

This very pretty Asian goddess bends over and hovers over her slave to seduce him, but she has a special way of seducing and turning on her slaves. She uses her vomit. She slides her finger down her throat and a giant load of warm puke drops right into his mouth and he has to eat every chunk of puke that she throws up. He just lies there with vomit all over his face.

Asian Puking While Getting Pussy Eaten

This big, beautiful and curvy ebony princess is pretty nasty, especially when she is puking. She throws up such a massive amount of vomit that it covers her slave's entire upper body. She is known for her large volumes of puke and she always makes her slaves eat it. Every woman has something that she is really good at and this voluptuous hottie is good at gagging and puking. 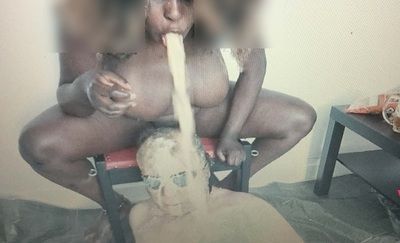